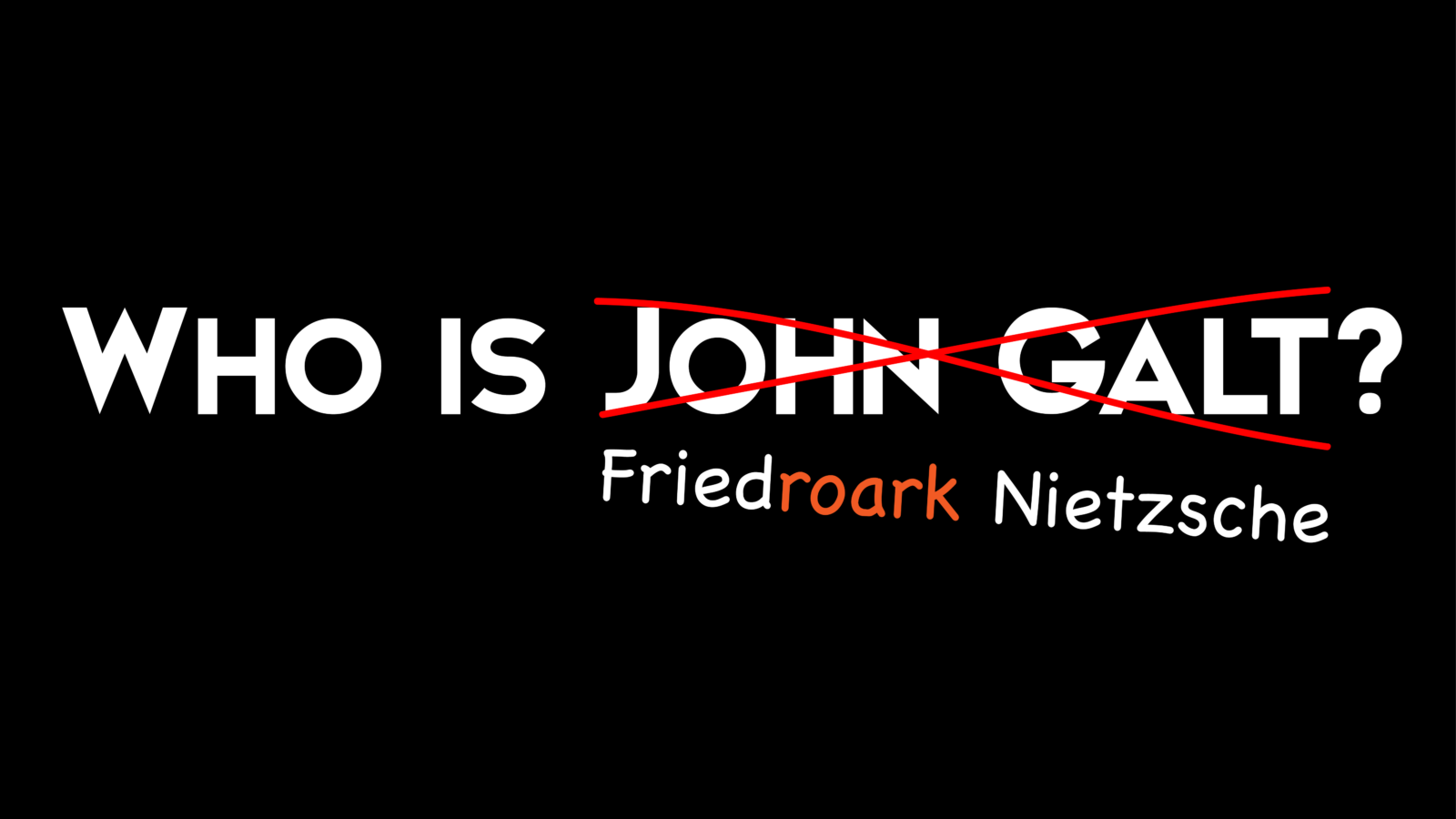 Preface: I do not hate Objectivism or John Galt, overall I’m a fan. However, I don’t call myself an Objectivist. No one should.

Once upon a time, in a solar system not so far away there was a Planet I. There were three bookuildings on the planet: The Fountainhead Tower, The Atlas Shrugged Building, and Thus Spoke Zarathustra Hall. In each bookuilding, the main character from each respective novel lived, and each day the characters teleported to the consciousnesses of readers around the multiverse.

Each year, Howard Roark, John Galt, and Zarathustra would leave their bookuildings for their annual Individualism Party. They met in the middle of their bookuildings, in a geodesic meeting room that was suspended over the ground by a skywalk coming from each novel.

Roark and Zarathustra had arrived and were starting to wonder if Galt wasn’t going to make it this year. Then, all of a sudden, the door from The Atlas Shrugged Building opened- but John Galt wasn’t there- it was a man who resembled Friedrich Nietzsche in every minute detail except one: the color of his hair, which shined a fiery ginger color that reflected that of Roark’s.

“My name is Friedroark Nietzsche, and I am here to tell you that Galt is dead.”

Friedroark chuckled for a second before replying: “As a character, you die whenever people stop believing in you. Now listen, I’m here to give you a speech, but I promise it will be more succinct than Galt’s.”

“First I’d like to ask why is your hair the same color as mine and why do you look just like his creator?” Roark snapped as he pointed his finger at Zarathustra with a curious gaze.

“It’s simple. I’m from a solar system between this one and that of your creators’.”

For once in his life, Roark looked baffled.

“Galt is dead, and we have killed him. The death of God was not merely the death of a deity, it was the death of inherited values- both religious and philosophical values. You, Howard, were spared because you inspired people to create their own values and live life for themselves. Galt has died because he inspired Objectivists to think of Objectivism as an Objective framework that everyone should follow.”

“Rather than letting his mind’s work flow into society like a fountainhead, Galt promoted the punishment of society for “its” morality, but every individual has their own morality. Even if most people’s’ philosophies are subconscious and unintegrated, they are not all altruists who deserve punishment.”

“I agree with John Galt that Man has acted as his own destroyer through most of history. But Galt’s solution, withdrawing the men of the mind from society, is a solution for Plato’s world of forms- not a solution for objective reality. If the great minds of today fled society it would be disastrous. We need the Elon Musks of the world to stick around.”

“Who’s that?” Zarathustra chimed in.

“He’s one of the greatest men of the mind from the planet of your creators. Creativity going on strike is destructivity going into action. Earth needs men who create against all odds, not men who withdraw themselves from society. Howard, when your Cortlandt Building project got hijacked, you didn’t just disappear into a gulch- you blew up the building and rebuilt the project with Roger Enright. Then you went on the construct a building as a monument to the great spirit that you possess. You and Galt are very similar, but also very different. You both believe in achievement, the mind, and creation. But you represent the resilient flow of water from a fountain rather than the despaired shrugging of the world. This is why you have lived, and Galt has died.”

“Your philosophy is that of self-creation. Galt’s philosophy is a didactic inter-subjectivism that conflates its epistemological system as the objective, scientific truth. Galt said that there are two sides to every issue: one is right and the other is wrong, but the middle is always evil. Well, I’m here to tell you that there are many sides to any philosophical issue. Some sides are right, and some are wrong, but most are somewhere in the middle.”